One example of an on-going community protection effort along the Front Range is the Ridgewood community in Teller County, CO. Ridgewood became a nationally recognized Firewise Community/USA® (FWC) in 2010, making them the first FWC in Teller County. Their wildfire mitigation efforts over the last eight years have grown exponentially to where the majority of the Ridgewood subdivision is dedicated to participating in annual efforts that reduce the community’s wildfire risk. 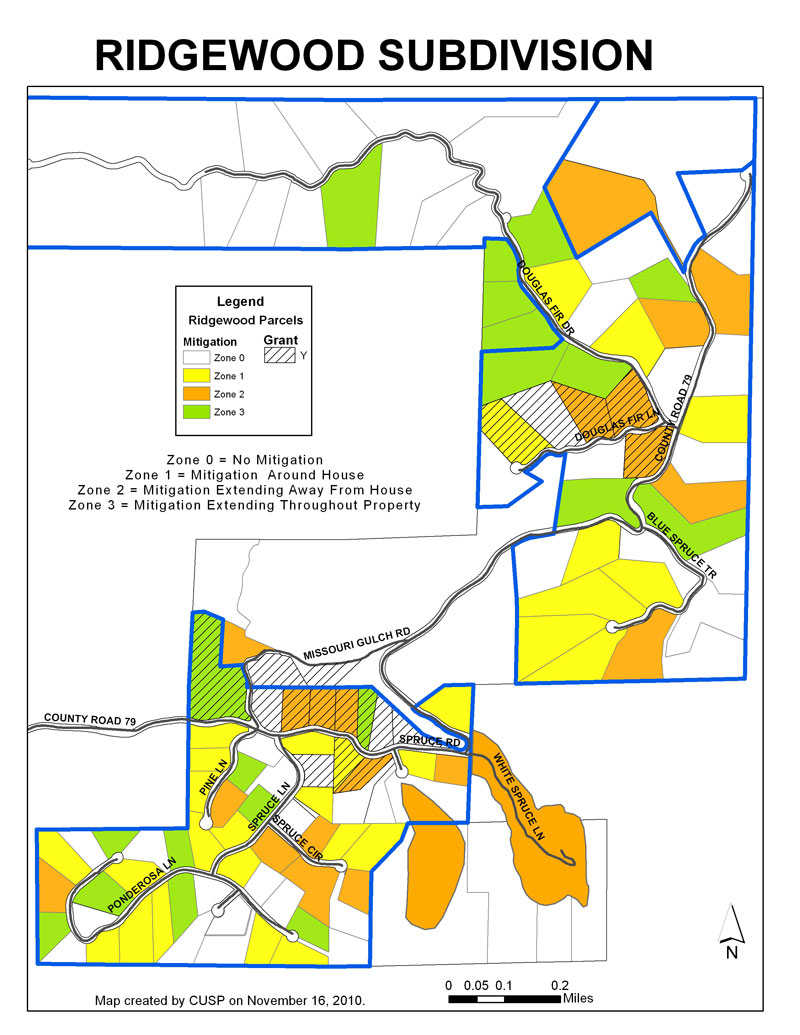 In 2002, Ridgewood was evacuated for ten days during the Hayman Fire, which spurred the Ridgewood residents to begin making their community safer. Under the leadership of Jean Blaisdell, Ridgewood began establishing the Teller County Slash and Mulch Site. The Ridgewood Community Wildfire Protection Plan (CWPP) was then completed in 2008, and it was one of the first plans to draw a parallel between fuels reduction and forest stewardship. The Ridgewood community understands that trees stressed by extreme competition for light, nutrients and water are weakened and more susceptible to both insect infestation and potentially damaging diseases, as well as large, damaging wildfire. Ridgewood has taken both of these concerns into account as they plan for the future, and their CWPP has been updated twice since 2008 to keep up with emerging forest threats and completed risk reduction efforts within the community.

Along with the reducing their own wildfire risk, the Ridgewood community also works to encourage their neighbors to take action around community protection efforts. The Ridgewood CWPP committee works with the Colorado State Forest Service (CSFS) Woodland Park District to determine the most at-risk residences and create a plan to utilize grant funds to mitigate those properties year by year. Since 2009, Ridgewood has mitigated approximately 200 acres within the community, and the majority of properties within the community have completed risk reduction activities or have completed their mitigation plans, understanding that continuous maintenance of the risk reduction efforts must still occur.

The Ridgewood community has been extremely innovative when it comes to raising funds for mitigation efforts. They have sold cookbooks of Ridgewood resident recipes, and made wreaths and garlands from trees pruned for ladder fuels during Christmas to be sold all over Teller County to help raise funds for the community’s wildfire mitigation efforts. It is these unique, inventive efforts that truly create the strong bonds between the neighbors within the Ridgewood community that lead to dedicated actions to reduce wildfire risk and that exemplify what community protection can be.

Ridgewood is a community of neighbors helping neighbors, creating connections and networks to help them take action to become more fire adapted and resilient for when a wildfire does occur. This community also serves as a reminder that while community protection is urgent, these efforts do not occur overnight. Community wildfire risk reduction is an on-going process that begins with raising awareness, continues through expanding knowledge of the available resources, and grows as communities change their behaviors and take actions to protect their community. Any process involving both landscape scale restoration efforts and community protection must take the community’s values and current science into consideration before implementation. Ridgewood’s community-wide risk reduction efforts are an example of how a community can develop and achieve long-term goals and proactive forest stewardship and community protection within the wildland-urban interface and providing opportunities to help neighboring communities understand the benefits of a healthy forest.